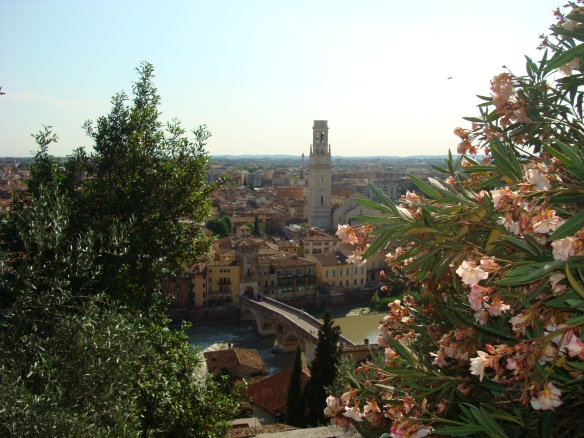 “Two households, both alike in dignity,
In fair Verona, where we lay our scene,
From ancient grudge break to new mutiny,
Where civil blood makes civil hands unclean.
From forth the fatal loins of these two foes
A pair of star-cross’d lovers take their life;
Whose misadventured piteous overthrows
Do with their death bury their parents’ strife.”

~ Romeo and Juliet by William Shakespeare ~

About this image: A glimpse of Verona’s Roman heart, enfolded in the loop of the river Adige and defended by ancient walls.

Although many romantic hopefuls visit Verona in order to get a glimpse of Juliet’s balcony on Via Cappello, 23 – I will readily admit that despite its renown this particular stopover was a disappointment. The courtyard gets very crowded, and the graffitied walls were not exactly in keeping with one’s expectations of what a Capulet’s stronghold may look like.  Do not fear, however, as there are more than enough balconies to satisfy the enthusiast. I lost count after the first two dozens.

I will not attempt to describe the effortless charm of Verona’s architecture, or enumerate the treasures it has amassed within its walls over some two thousand years of uninterrupted expansion. I could hardly do it justice. Neither my amateur photography nor any praise I offer will be able to translate the ease with which this city will seduce you, should you chance to pay a visit.

16 thoughts on “In fair Verona, where we lay our scene…”