If only there were 48 hours in a day! It’s taken me a very long time to give my thanks to those wonderful bloggers who have nominated shardsofsilence for the Blog of the Year Award not once, not twice, not even thrice. Thirteen nominations from seven bloggers!

While BOTY has six stars to collect, it looks like I have a beautiful constellation to bring starlight to the holidays.

So… my apologies for the delay and hope you are all enjoying a wonderful festive season.

A big thank you to Bea BulgingButtons for a double nomination. Yupee! Her resourcefulness reminds me to appreciate the Simple Things in life, although there are times when you’ll be Spoiled Rotten on her blog.  Choices-choices!

Many thanks to Zainab who chronicles her son’s adventures in heart-warming prose on A mom’s blog. She wrote and illustrated Nadir and Incy Wincy Spider as well as Nadir and the snake. Feel like a child once again 🙂 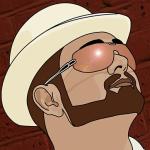 Don and I had met a couple of months ago when we both guest blogged on HarsH ReaLiTy and discovered that we share a love of dragons amongst other things. , “because anything is possible with Charisma” 😉

I had a flurry of pingbacks from DonCharisma.org earlier today and wondered whether something had gone wrong. Not so.

Finally, a big thank you to Spartacus2030 who is so prolific a writer that he has two great blogs! You’re sure to find something to your taste on at least one of them.

A Happy Holiday Season to You!