“Kill me then! I never asked to be born anyway!”

I am the girl who ought never been born.

Was I meant to know this, or did it slip up in anger? There was someone else loved for some twelve joyful weeks. Another body grasped at life, cells dividing, multiplying to bring forth the beat of another’s heart.

An elder brother or sister, I thought at first. But no… That could not be. My existence relied on their having perished. I was an interloper, colonising a womb still grieving for its loss, stepping over bloodied memories and anchoring myself into its wall when the coast got clear. It may have protested, but it did not manage to shift me. I wedged in; not a quitter me. A survivor.

I did not ask to be born.

How often did I feel it as a child; and thought of it more often still, though seldom speaking out. There were slipups however.

It was a sunbathed morning in June. The war was afoot. The White Queen marshalled her pawns in a straight line and then proceeded to inspect her cavalry. The knights’ armour gleamed as white as the coats of their steeds. In the distance, across the carpeted fur-land, the Black Queen was similarly occupied. The Kings took their siestas. They weren’t much good these kings: could hardly move for old age, and even when they did they were bound to get themselves into more trouble that was worth anyone’s while.

‘Twas time to advance. The queens met on neutral ground – at Giantdoll-Hill – and deliberated which of their parties ought to make the first move. The custom, according to grandfather, was for the White to go first, but that struck the Black Queen as somewhat unfair. They appealed to my wisdom and experience. A new set, I suppose I did have a few years of know-how on them. After thoughtful consideration, I decided that the best way out of the conundrum would be to flip a coin. Let fate play her hand. I’d seen father do it. It looked like fun.

Problem was, I had no coin of my own, and mother had to be kept in the dark about my play. I’d been instructed to tidy up my room an age ago, and she would be none too pleased if she discovered that instead of a clean-up, I opted to add to the mess.

You should never-ever think about things you do not want to happen. No sooner did I think of her, that she presented herself on the doorstep: a giant urn, both hands implanted on broad hips, one flaming cheek skyward and another touching the parquetted floors of Lucifer’s homestead.

She hurried forward and gathered the chess pieces in her lap.

Disgruntled, I plunked myself into the middle of the room, determined not to lift one finger in her aid. Mother looked worn. Something in my attitude irked her. I knew I ought to help her and that I’d pay for it later if I kept it up, but I was in a combative mood and beat the guilt-tripped reason into silence. At last, mother lost it.

“Selfish girl! You’ll do what I say or – I swear to God, just as I gave birth to you – I’ll kill you with my own two hands!”

“Kill me then! I never asked to be born anyway!”

I am the girl who lost her mother.

It took me years to find my way back to her. I blamed her for many things, bad things that happened to us. I blamed her too for failing to keep me in the dark about them. I didn’t want to grow up. Not then. Not that way.

She might’ve been a better daughter, that other girl who didn’t make it through.

It was easier to numb the pain, pretend it wasn’t there. I wanted to be free of it, even if she couldn’t be. 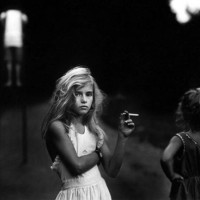