“If it’s so damned important then it should’ve come first.”

“It is important. It’s the quickest way to determine if you’re skilled enough to make it. Thing is…”

“Publishers don’t look at dialogue first. It only gets a look in after they’ve checked the other big five. If your manuscript suffers from any of them: sloppy presentation, inadequate style, ‘wrong’ sound, clichéd comparisons or a plethora of unnecessary, commonplace adjectives and adverbs, then they –”

“Check for dialogue. Yes. Got it. What next?”

“Well… If your dialogue is poor too then they don’t bother with the rest.”

“I don’t think this one will make it big on their list of ‘good’ dialogue either,” I said, shuffling from one foot to the other. Could kill for a ciggie. All this talk about yet more things that would get my manuscript shoved into the rejection pile was beginning to grind me down. It wasn’t a good idea to keep at it without some caffeinated backup first. 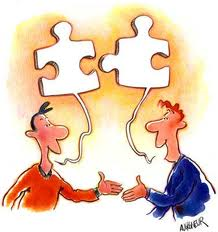 Dialogue. I used to throw myself into writing pages and pages of it, because I enjoyed it, and because it came easy. My first draft was what in publisher parlance is called ‘loud’: filled to the brim with chattering lines.

Those days are long gone. I had to rein in my enthusiasm and use it sparingly once I realised that such powerful weapons ought to be wielded with care.

Since dialogue is prone to a thousand and one problems, this will be the first of several instalments. Possibly five, but we’ll see. I’ll play it by ear. What I will look into first is how we present dialogue, because this is the first indicator to an editor whether they can dismiss it before reading a single line.

So… open up your manuscript and start skimming. What do you see?

Have you come across of pages and pages of dialogue with no breaks in-between? If so, then we have a problem. Your prose is too ‘loud’ and an editor will dismiss it out of hand.

Have you read dozens of pages without coming across a single line of dialogue? Then it may be that your prose suffers from the opposite: it is too quiet.

Both issues have easy solutions: trim back and add pauses if you have too much dialogue; look for places where you may be able to insert a little conversation if you have too little of it.

Here are a few of the common problems and solutions to dialogue maladies:

1. Under-used, over-used or misused attributives or identifiers (he said, said she)

Attributives attribute speech, or to put it differently: identifiers identify who’s line of dialogue we are reading. When we have multiple characters then it is key to keep identifying them, otherwise the reader will get lost in the sea of “he and she said”. When there are only two characters, we can identify them to start with then switch to “he said” or “she said” and can even skip identifying them for a couple of lines if it is clear from the context who the speaker is.

Also, “he said” is preferable to “said he” unless you are writing a historical novel, and even then the first version reads better. The whole point of identifiers is to indicate the speaker while remaining “invisible” to the reader.

You can use identifiers at the beginning, in the middle and at the end of the line. The last is almost always the better option, but there are times when a pause can be suggested by using it in the middle of the line.

Another option is to substitute identifiers with action: “whispered”, “cried”, “yelled” – just make sure this is done sparingly as action verbs are always more visible than the straightforward “said”.

Having no identifiers at all is not a good idea as this will lead to confusion and rejection.

2. Dialogue diarrhea (excuse the imagery): long, uninterrupted interchanges of dialogue can be spotted just by skimming through a manuscript and gives the impression of someone sprinting to the finish line.

Dialogue is inherently dramatic and accelerates pace. This is why it is important that both its quantity and quality be in keeping with the rest of the prose. Long stretches of dialogue need to be broken up, the excess eliminated, and snippets of “direction” introduced. After all, we don’t want talking heads – the characters need to be steeped into the scene, their environment, and interact with others even while speaking.

3. Dialogue without momentum – in opposition to the previous point – this is dialogue that needs to flow, but has been interrupted too often either by unnecessary identifiers or long stretches of description that have been mistimed.

To rectify this, we need to cut out the interruptions to a manageable level – especially for moments of tension, when no one cares what the room looks like and all they want to do is read the next witty line of dialogue instead.

4. Speaketh the journalist: This is rarely a problem for writers who are not also journalists, but worth a mention. Those writing in a journalistic style tend to “quote” their characters rather than letting them speak. Imagine this: two lovers that sound as if they are reporting breaking news. Dialogue is emotive not factual, so… the reporting is best left to newspaper articles.

This is all for now. Next instalment coming soon…