“Faced with ongoing protests over economic conditions, the Spanish government is about to make insulting police officers and protesting without permission crimes punishable by fine greater than dealing drugs or prostitution. Not since Franco has the country turned so decidedly against civil liberties and free speech.” 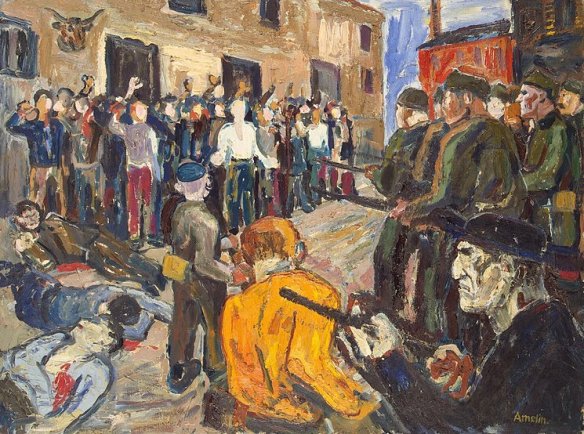 Current attacks by the Spanish government against a fundamental right in a democracy, that of the freedom of speech, has determined me to return to the subject. Many of you will have strong opinions about this and I invite you to consider my position and share your own.

The concept of rights has never had as much weight and popularity in the West as it has gained since the American and French revolutions. Today rights are at the centre of modern politics and at the very heart of democracy, as Roger Baldwin said: “So long as we have enough people in this country willing to fight for their rights, we’ll be called a democracy.” But let’s consider this: does any right sometimes have to be overridden?

To answer this question, we have to consider what it is that we mean by the term itself, and then we’ll take a look at the “over-rider” in question in view of current debates.

Now there are too many definitions of rights for us to be able to exhaust them in this context, so I will only give you one – the one which I think is most relevant to this present discussion:

If rights are no more than a security net for the eventuality when everything else has failed, we must ask this: who would request for this last resort to be given up and for what reasons. As the state has a monopoly of force and thus is more likely to infringe individual rights than any other political actor, and since our current wanna-be infringer is the Spanish state, we can limit the debate to states and their representatives.

After the Second World War human rights have attained primacy in political discourse and in most liberal agendas, as the atrocities of the Nazi regime were unveiled one by one, shocking the world beyond imagination. The United Nations declared that basic freedoms and rights should not be denied to any human being if the horrors of the Holocaust are not to be repeated:

“Whereas disregard and contempt for human rights have resulted in barbarous acts which have outraged the conscience of mankind, and the advent of a world in which human beings shall enjoy freedom of speech and belief and freedom from fear and want …” (1948, http://www.un.org/Overview/rights.html).

So this is what the Spanish government is currently trying to demolish in its actions and by doing this it aims to plunge its citizens into a world of fear and unfreedom. You may think that this is only Spain, why should the rest of us care? But as Jonathan Turley rightly warns: “as economic and social tensions grow, such measures may expand throughout Europe.” and I would add to this that America has reason to be concerned as well.

Several points are to be considered in dealing with the issue of overriding rights: should  governments give pre-eminence to some rights over others? Are they in their right – excuse the pun – to make a distinction between primary and secondary or prima facie rights? If so, it is important to investigate whether governments should be free to eradicate secondary rights when viewed as necessary.

But what rights are primary and which are not? Which of our rights should be deemed unalienable: civil rights, political rights or socio-economic rights?

It is clear that each generation of rights has been building upon the one preceding it. When it comes to unalienable rights, I’d say that first-generation rights – of which free speech is a part[1] – would certainly be amongst those that we must be called to defend first and foremost.

Freedom of speech is not an issue of abstract debate, as Rowan Artkinson put it: “The freedom to criticise ideas is one of the fundamental freedoms of society” and when it comes to breaking the law (which presumably is the government’s concern in Spain)  there are already sufficient laws to deal with extreme situations.

I agree with Raz when he says that “there can be no legitimate reason for curtailing it [freedom of speech], since its possession and its exercise do no one harm. Words do not kill.”

In a truly democratic and multicultural society, it is essential that criticism and free expression of disagreement, condemnation and even hostile views and attitudes should be protected, in order to avoid the endorsement of an illiberal society, where only those who express approved views are allowed to express them.

In conclusion I would like to say this. The Spanish government may argue that some rights, such as freedom of speech, religious toleration, peace, and economic development, for example, are prima facie and thus could be overridden sometimes, when it is essential to the maintenance of security and evasion of calamity. However, if history has taught us anything it must be this: all these are indispensable rights and should not be overridden under any circumstances. These are the rights that give people a sense of worth and a sense of human dignity, thus their status of absolute rights is essential to the perpetuation of democracy, and more importantly, to the safeguarding of humanity itself.

[1] As stated in the Universal Declaration of Human Rights, Article 19. “Everyone has the right to freedom of opinion and expression; this right includes freedom to hold opinions without interference and to seek, receive and impart information and ideas through any media and regardless of frontiers.” Also available on-line at: http://www.un.org/Overview/rights.html

4 thoughts on “Any right sometimes has to be overridden”