It appears that Tee and I have another axe to grind, so… here it goes.

You can read my reply below , and it’s the same link for her article, although you’ll have to scroll down to her reply to my commentary on race to follow the debate: http://aopinionatedman.com/2013/09/19/project-o-article-76-tee-rzzl-california-usa-scheduled-for-9-19-1800/comment-page-1/#comment-63530

Thank you for your comment. Always interesting to read someone else’s take on feminism.

I am a feminist, yes. A happily married feminist, and count as many men (if not more) as women amongst my closest friends. I also wear bras – great support and much needed, wax my leg hair, shave underarm and prefer a casual-smart look that more often than not leans towards smart (or so I’m told).

Oh yes, and high-heels – that invention by our male masters to torture us? – love them!

Fun fact: High heels were invented by men for men. It was fashionable in high society to be tall, so men opted for high heels and platforms to enhance their looks and ‘standing’. Women only later adopted the practice, having decided that they would rather like a better vantage point too.

I understand where you are coming from, but I would like to underline that what I understand by feminism can be simply put thus: men and women are human beings of equal worth.

It is as simple as that.

I am aware of differing positions within feminism… Yes there are as many strands as there are ideologies, and each with their own take of what feminism is supposed to be about.

I do not think that women are victims of men (although sometimes of course they may be, given the individual case – I take it we are discussing this in general terms here).

But I do believe that both women and men are victims of patriarchal social arrangements. Yes, both. 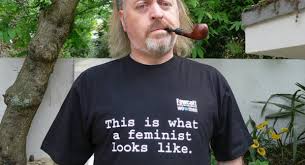 In most societies, most of the time, women are under constant pressure to conform to some particular image of what a woman is supposed to be (womanly, motherly, caring, gentle etc.), and the same goes for men. I believe that men have just as great capacity as women for care-giving. I know that many men would love to be stay-at-home dads, or at least to get more time to spend with their families. But they still feel that they have to conform to what is expected of them to be as men, so often take the conservative route rather than risk ridicule.

This is mostly learnt behaviour.

I disagree here with your claim that there is ‘hard’ biological evidence. Unfortunately the medical profession works more often than not on a trial-and-error basis. All science is the same. The ‘hard’ evidence of today is the failed theory of tomorrow. So I think it would be more useful to look at both biological and theoretical (or ideological) “evidence” as nothing more than differing models or frameworks – temporary ones at that – for making sense of the world in general, and of a difficult issue in this particular case of gender.

In the nature vs nurture debate, I think it is mostly nurture, but of course biology will always play a role (just not as great as I think many would like to believe).

I am not a feminist who vilifies men. I have many male friends who also subscribe to this view of feminism and happily refer to themselves as feminists. Perhaps a majority of feminists are in fact far more moderate, if perhaps less vocal than their extreme counterparts that you refer to in your comment. 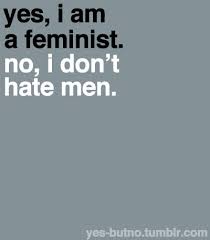 I am also familiar with Freudian theory. In addition to undergrad courses, I’ve also attended the Institute of Psychoanalysis Introductory Lectures a few years back, and I have an affinity with many of Freud’s theories, although I am sceptical of the ‘penis envy’ one.

– I’ve always been happy with my ownership of a womb: less trouble by far than a penis, and doesn’t go tiny when it’s cold

Freud himself admitted that he did not understand women, and his theories about womankind are insufficiently developed. There is one particular view that I found fascinating and believe is a very useful one when it comes to making sense of gender issues: Freud’s claim that our psyche (both male and female) is inherently bisexual.

In simple terms, I take this to mean the following: we are equally capable of loving both men and women. Ultimately, it is about people, persons, human beings, mortals (I think I’ve exhausted gender-neutral terms here), and what they have in between their legs is immaterial to interpersonal relationships when societal norms and regulations do not come into play.

I am a man-loving-woman-loving-people-loving feminist and a democrat in equal measure. I’ve said this elsewhere, but perhaps I would do well to repeat it here:

You cannot defend your democratic credentials whilst treating 51% of the population as second grade citizens.

10 thoughts on “If you are a democrat, you are a feminist”